The show takes place in the doctor’s laboratory, which is a joint enterprise with the army, where Woyzeck serves. The soldiers are medical students. 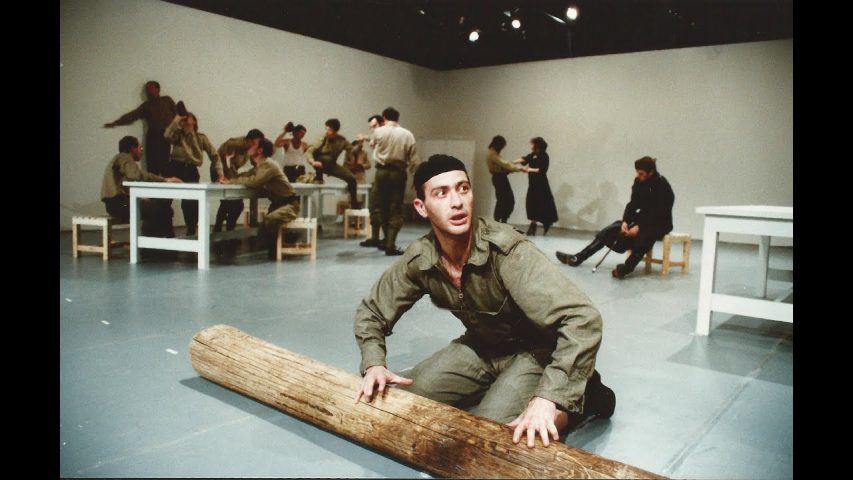 The show takes place in the doctor’s laboratory, which is a joint enterprise with the army, where Woyzeck serves. The soldiers are medical students. These are last three days of the scientific experiment on the soldier Woyzeck. The doctor orders him to eat only peas for three months. Each time there is change in his physical or mental condition, a lesson is conducted, using scientific tools such as a microscope, pulse measuring, semen analysis, checking the skeleton, blood circulation, etc. This is accompanied by anatomical projections, demonstrating to the students the physical internal happenings.

The lessons’ texts are based on school-texts of the human body in scientific language and Latin, which renders Woyzeck incapable of understanding what is done to him. The experiment’s aim is to develop an androgynous species, to improve human genetics.

At the time, the pea plant was studied for its main characteristic of being androgynous. Genetic science evolves from that study. According to the doctor, the revolution genetic science is going to make will be of more significance than the French Revolution… With the army as patron, experiments on humans and animals are authorized. If for Shakespeare all the world’s a stage, for us all the world’s a lab.

Woyzeck dies after killing his love, Marie, without understanding his actions. The doctor and the Captain wish to examine his brain in order to create one language, one faith, one thinking… I don’t know of any other play dealing with experiments on the human body, brain research and genetics. The play, with its German culture backfround, anticipates as well what was going to happen in Germany and all over the world in our time…

In order to give the audience an orientation regarding Woyzeck’s life-story, that is interrupted by the classes, we created a puppet theatre, to which the audience is invited in the intermission, and in it we show the original story of Woyzeck the barber and his treacherous wife, right until his hanging in the town-square.