The adaptation’s storyline begins with old Peer Gynt on top of a ship in a stormy sea. He’s returning, destitute, to his homeland after 50 years of wandering. 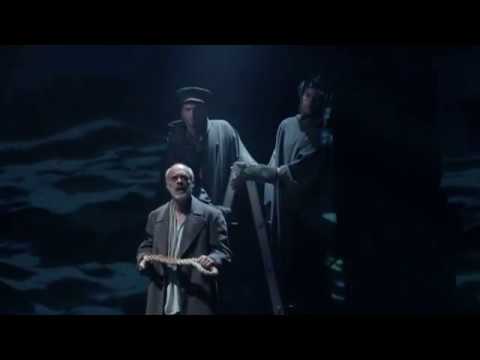 The adaptation’s storyline begins with old Peer Gynt on top of a ship in a stormy sea. He’s returning, destitute, to his homeland after 50 years of wandering. A great storm drowns the ship. Peer struggles for his life and lands on shore. On his way home, he encounters a character, “the recycler”, who was sent to collect his soul, since he was never “himself”, and send it to be recycled. From this point on, old Peer Gynt looks back on his past, on his own character, represented by three other actors.

Peer, who refuses to accept his fate, is obliged to prove to the “recycler’ that all through his life he was true to himself, even at the price of love, marriage, honor and money. For this end he conjures up his memories and various moments of his life: young Peer with his mother, dreaming to become an emperor, his fateful meeting with Solveig and their mutual vow to love forever; his encounter with the trolls; his farewell from his mother; his squabbling once again with the villagers, which forces him to run away overseas. Solveig waits for him. We meet him again 20 years later, on his way to become emperor of the world; he ends up in an asylum where he is crowned as “emperor of the self” and collapses. The “recycler” watches all the goings-on, and every once in a while gives Peer another postponement to prove he was indeed “himself”. Eventually there are no more extensions. Solveig, old and blind, recognizes his voice and holds him in her lap. As she says, in her love and hope he was always himself. Peer is saved for now, but the recycler warns him that they will meet again in the last crossroad…

Everything fades and disappears, there’s no stopping it, and probably this is what is called “living”… The drama is not in the play but in the phenomenon of theatre itself, the battlefield of life and its disappearance, and this drama does not depend on the play’s genre or plot. In this adaptation, the audience is invited to be attentive to Peer’s voyage of “memory and forgetfulness”, where the past, the present and the future merge, and at the same time to be aware of our time as spectators in a show, a time that is running out as well. “Peer Gynt” is a journey-play of the character into himself and out to the world. The reverberating theme for today is that of the “recycler”: “You were never yourself”, and Peer’s main fear is to lose his uniqueness and become a part of the general human mess. All this has nothing to do with God or morality, the question is with what means can we measure success and failure?

The “recycler” role is a combination of several characters in the original play: The “stranger” on the ship, who asks, for the purpose of scientific research, to get possession on Peer’s corpse once he’s drowned, in order to dissect it and find in an anatomical manner the source of wishes and dreams; A wandering photographer with a net to catch souls; and the button-molder, who melts and recycles whoever is needed to be. The recycler’s camera is the instrument in which he melts his victims and makes new material out of them. Taking photos, internally and externally, of people and the world, is today at its peak all through the world.